The Dancing Sun Rays Of Twilight 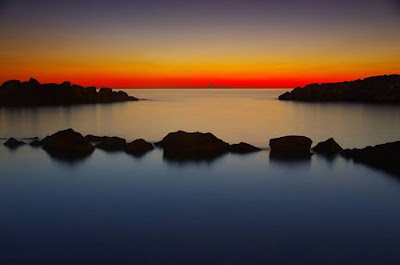 Every morning and every evening on planet Earth, when the sky is clear of obscuring clouds and the view of the horizon is not blocked by mountains, hills, trees, or buildings, nature’s solar light show can be seen and enjoyed. This is morning or evening twilight. The orb of the sun is no longer visible, but its sun rays appear to dance for your pleasure.
The color of the sun rays changes dramatically and quickly from yellow, to orange, to red, and even to pink as the sun’s light moves through particles in the Earth’s atmosphere. Even though the phenomenon is fast-moving, we see it in three distinct phases. These phases are known as civil twilight, nautical twilight, and astronomical twilight. However, astronauts in orbit around the Earth have a different view. They can see a shadow line of darkness, the point of transition from some natural light to total dark, then a line of red, white, and blue before the boundary of the darkness of deep space begins. I suppose that this is inspirational to United States, British, French, and to Russian astronauts since these are the colors in their national flags.
When the sun is six degrees or less below the horizon, civil twilight occurs. In towns and cities, the light spectrum falls to the point that street light sensors will turn on those lights. At six-to-twelve degrees below the horizon, the sun is far enough hidden from the human eye that there is not enough light to perceive the line between Earth and sky. This is nautical twilight. As the sun passes twelve-to-eighteen degrees below the horizon, the glow leaves the sky. This is astronomical twilight. Total natural darkness begins. Now, with no artificial light (especially from the street lamps of cities and towns), and when there are no clouds, we can clearly see the stars, the moon, and some planets.
Twilight has acquired another meaning, one that is disconnected from the position of the sun. Have you heard someone say that they are in the twilight of their career or their life? They describe a period of gradual decline, a time when they question if they matter, and their work becomes obscure. They and others see ambiguity in their relevance to the company, and later, to life itself. In either case, this sounds harsh, but it is life. Life is all about procreation. In our elder years, we consume resources and add less value to young life. But, take heart. If you plan it and resource it, you can retire from the fast pace of a working life to live at ease. I am there right now, at the noon time of my life. It was like stepping off of a passenger train, waving goodbye to those who stay on the train of life, and then I get to greet others as they step off their trains into retirement. I expect astronomical twilight to begin something big, rather than to signal the end of my life. That will be when I get to see the glorious rays of heaven as Jesus, the son of God, rises.
“Pondicherry,” https://www.amazon.com/Pondicherry-Tony-Grayson-ebook/dp/B00Q7E39Z6
Tony is a writer, an author of several published novels, and an independent publisher. In September 2012, he wrote and published the first of a three-book drama series, “A Voice from New Mill Creek: The Methodists,” as an e-book. In April, 2013, he released his second e-book and first romance novel, “Goodnight Paige.” In July, 2013, Tony released a guidebook titled “How Tony Wrote and Published Two Novels.” In May 2014, he published “The Star of India, “the second novel in the Voice From New Mill Creek drama series
Article Source: http://EzineArticles.com/9535264